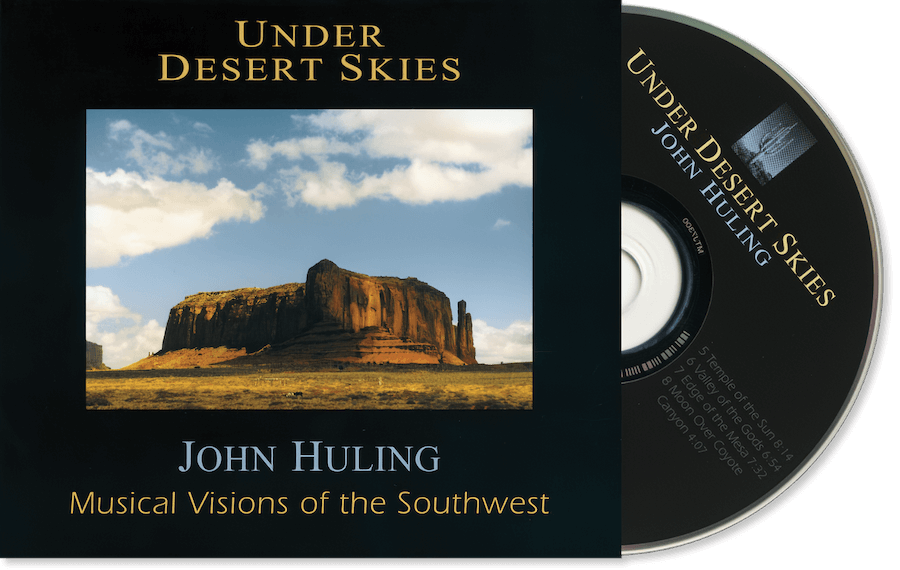 The ancient voices of nature such as desert birds, coyotes, whispering winds and thunder provide a relaxing backdrop to John Huling ‘s inspired musical odyssey. A great album for fans of Native and Native Influenced artists with a contemporary side of the sound spectrum, not to mention those who enjoyed his albums Spiritlands. This is his best yet!

Recorded amongst the ancient canyons, mesas and ruins of the Desert Southwest, Huling’s “Under Desert Skies” guides you on a musical journey through the Southwest that you will want to take again and again.

A #1 Bestseller for nearly 14 years! In the top 10 for 16 years! Also, try Southwest Passages , Sleeping Desert and Canyon Light the newest in the Musical Visions of the Southwest series from John Huling.

“When John Huling sets out to paint a musical portrait of the Native Southwest, he not only manages to capture the tone and mood of life amongst the canyons, he does it with style.”

UNDER DESERT SKIES, Huling’s release on the Novox Music label, is a soulful and soothing example of Southwestern music at its finest. It solidly plants one foot in the natural world and the other in his visual music studio.

Huling’s flute is the centerpiece of these wonderful recordings in which he builds his compositions around wildlife and weather sounds including gentle winds, birds, coyotes, water and light drum beats with an attractive layer of synthesizer choral ambience.