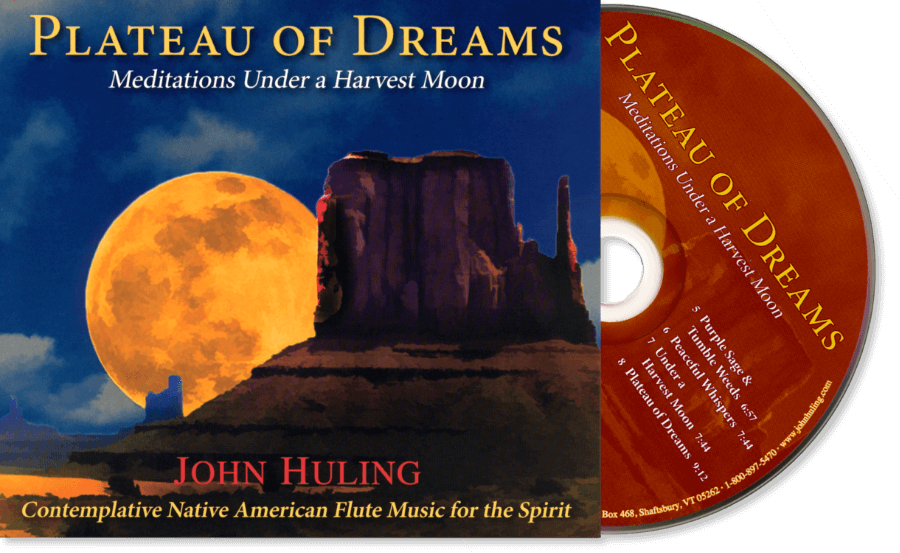 Plateau of Dreams CD – Meditations Under a Harvest Moon by John Huling draws inspiration from the Southwest Desert Plateaus of the Four Corners Area of Arizona, Utah, Colorado and New Mexico. Native American Flutes accompanied by a variety of other instruments including gentle drumming and the soothing sounds of nature from the Mesas and Canyons of the Southwest.

Plateau of Dreams takes you on a meditative inner journey for healing the spirit. 60 minutes of musical stories for the heart, mind and spirit.

Native American Flute Music Inspired by the Deserts Landscapes and Nature of North America. Plateau of Dreams is dedicated to the many friends, family and fans that have crossed over. We miss you.

John’s Native American flutes are accompanied by a variety of other instruments enhanced with the soothing natural sounds of nature recorded around the Mesas and Canyons of the Southwest.

“You can almost see and feel the desert in your mind. What a gift to his audience John has given in these new CD’s. Thank you!”

“Relaxing and fulfilling… beautifully arranged masterful flute playing. The sounds of nature and the orchestrations are just gorgeous. You have once again outdone yourself!”