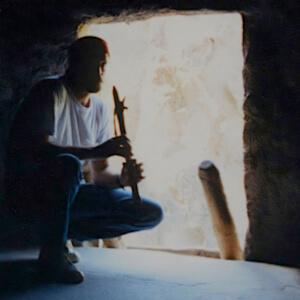 Huling’s Musical Visions of the Southwest Series is some of the best selling Native American Flute music ever. They include Spiritlands, Ancient Canyons, originally titled Return to Spiritlands, Mesa Sunrise, Canyon Spirit, Ancestral Waters, Under Desert Skies , Plateau of Dreams and many more. Huling’s music has remained in the top ten bestsellers list for more than 25 years!

John Huling received his nearly 50 plus years of musical background from the early age of 4 years of age. He started with percussion, piano, other electronic keyboards, Native American flute, acoustic guitar and electric guitar. Huling’s formal education ranges from Psychology, History, Oceanography, and Pre-medical academics to 20 years as a successful internationally renowned commercial photographer. Huling’s photographic work has been published world wide in the Smithsonian Archives for Historic Preservation, Architectural Digest, Harpers Bazaar, Architectural Record, Smithsonian and numerous other publications. John also did a short stint as an actor and model. In the 70’s and 80’s he appeared in numerous films, commercials and print ads. 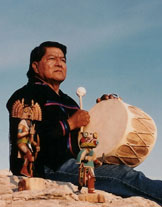 John Huling performed in numerous concerts nationwide with close friend Alph Secakaku (pictured), who is world famous in his own right as a performer and author. Alph is from the Hopi Pueblo Indian tribe from the Second Mesa of northern Arizona. Alph’s brother Ferrell Secakaku was the leader (Chief/Chairman) of the Hopi tribe for many years before his passing. He will be missed. John’s Native American Flute concerts are always inclusive and respectful of all who attend. They begin with opening “Hopi styled” blessing song. John believes, as does his friend Alph Secakaku, (pictured at left) that we are all more similar to each other and that race has little to do with individual character. “We prefer to let the music speak for itself and bring people together in spirit.” says Huling.

Heralded as being one of the originators of the ‘Native American influenced’ sound since the mid 80’s, the multi-instrumentalist John Huling uses self-recorded nature sounds and plays a large variety of acoustic instruments. He uses instruments that include piano, pan flutes, ‘alternately tuned’ guitars (learned from his friend Will Ackerman and Michael Hedges), a plethora of exotic drums and of course his emotionally expressive Native American flutes. Contrary to popular belief Huling uses little or no synthesizers. One of Huling’s strongest musical strengths is in his melodies. They are always original and memorable. More importantly they always have a story to tell.

Television networks such as ABC, BBC, CBS, NBC, PBS, The Learning Channel, Discovery Channel, the Olympics and The Travel Channel all have used Huling’s music for documentaries concerning the environment as well as Native American subjects.

“Having had close friends like photographer Ansel Adams (pictured left) really helped my photography and my music. “It was Ansel who got me interested in music again!” exclaims Huling.  “In the mid to late 70’s Ansel and I did more piano playing together than taking pictures sometimes. Although we “talked photography”, I really learned a lot from him about composition, especially as applied to not just photography but music as well.” I will always remember going on a photo outing with Ansel for the first time. We took more notes about the “quality of the light” than actually taking pictures or “making a photograph” as he would say. Those times with Ansel helped shape and influence my musical compositions.

Long before Native American flute music had become popular John Huling was following his heart and crafting his musical compositions. With a melodic blend of his ancient wooden flutes, contemporary as well as world instruments and his own nature recordings Huling weaves a tapestry of truly heart felt, melodic and inspired… always original music. John Huling’s music remains one of the most copied and emulated styles of music in the genre today. Huling is one of the few “true original” Native Flute players.

A professional full time Artist, Composer and Producer since 1983 John Huling’s music has received worldwide accolades from the Juilliard School of Music, noted performers from Carnegie Hall and numerous other highly respected institutions of Music. Huling’s music has been heard and sold throughout the world including the United States, Australia, Canada, China, England, Germany, Holland, South America, Japan and dozens of other countries too numerous to list. John Huling has sold more than 1.5 million albums (equivalent to 3 Gold Records) and has been heard by more than 100 million people worldwide.